DELIVERY, DATA AND DELAY: AVOIDING PROBLEMS IN A PEAK SEASON LIKE NO OTHER

Although it might not necessary feel like it, we have just started what might become one of the most momentous periods in the history of the parcel industry.

This is the time of year when retailers and their trusted delivery partners, like PostPlus, begin dealing with a considerable increase in the volume of items bought online.

Given the last 18 months which the world has experienced, the prospect of having to process more packages may not sound that dramatic.

However, a little background always helps.

Despite online sales increasing throughout the course of 2020 as high streets the world over were closed to prevent the spread of Covid-19, parcel volumes generated as a result of the Black Friday-Cyber Monday weekend in late November were up 86 per cent on the year before, according to one piece of research (https://www.parcelmonitor.com/blog/e-commerce-logistics-in-review-europe-2020/?utm_source=multimodal_news&utm_medium=newspage&utm_campaign=2020_highlights_europe).

This year’s picture is even more complicated.

To the continued rise in online orders can be added the conundrum of cross-border shipments following Brexit and the introduction of new VAT rules by the European Union in July (https://ec.europa.eu/commission/presscorner/detail/en/IP_21_3098).

The latter change was intended to “simplify cross-border e-commerce” but means that all goods now have VAT applied from the first cent or penny of their value.

Brexit not only resulted in the prospect of extra customs charges but new processes which require more comprehensive information from both shopper and shipper alike.

Given that one-quarter of all online sales in Europe last year were cross-border (https://ecommercenews.eu/25-5-of-ecommerce-in-europe-is-cross-border/#:~:text=The%20cross%2Dborder%20share%20represents,towards%2026%20percent%20and%20more.) – orders which were worth an estimated €146 billion ($168 billion) – it’s important for retailers and logistics firms to ensure that they make no mistakes.

There are now, quite simply, more obstacles to efficient e-commerce deliveries than ever before.

Just as retailers and parcel delivery firms accept their role in meeting these challenges, customers too have a part to play.

Consumers have to be clear about what they’re buying and where or how they want it shipped in order to ensure that goods which are intended as Christmas gifts, for instance, arrive in time for the festive season.

At this time every year, a substantial rise in parcel volumes across Europe is accompanied by an increase in deliveries which present an issue – or “exceptions”, as they’re known in the logistics industry.

Some are unusual but entirely avoidable. They include orders of so-called restricted items, such as drones bought by consumers for delivery to territories like Israel.

Despite these sorts of items being paid for, delivery just won’t be possible if they’re prohibited by the authorities in the countries to which they have been dispatched. In many cases, they will be destroyed and, sadly, there’s nothing which the shopper, the retailer or the courier can do about it.

Other issues are even more easily fixed.

For example, many problems arise from inaccurate information – a recipient’s name, address and contact details – being provided at the online checkout.

In addition, the results of one study published in April highlighted how Pick-Up and Drop-Off (PUDO) points, such as locker terminals and convenience stores, have become much more popular in the last couple of years (https://ecommercenews.eu/40-growth-in-pick-up-drop-off-points-in-europe/).

Such facilities have grown in appeal because they are so convenient. Even so, operators across Europe have reported more cases of consumers not responding to delivery notification messages and collecting purchases from their nominated PUDO points.

In some instances, shoppers have spoken of concerns about what happens to their data, something which has apparently become more of an issue in the year’s following the adoption of the General Data Protection Regulation (or GDPR, for short) in 2018.

The Regulation was intended to standardise data processing laws across Europe as well as giving people a better idea as to how their data was used and by whom (https://www.wired.co.uk/article/what-is-gdpr-uk-eu-legislation-compliance-summary-fines-2018).

Under these rules, major brands and logistics firms have significant responsibilities relating to how they handle consumer data – the very same information which is essential for swift, successful deliveries.

As we approach the busiest period of the year for online shopping, retailers and logistics companies strive to do their best.

Having consumers provide us with the right details for every shipment increases the likelihood of goods arriving where and when they should, meaning a happy Christmas for all. 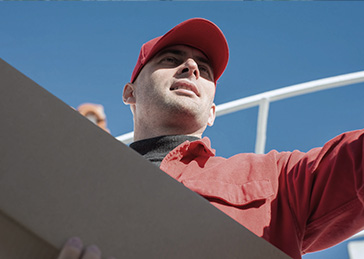